Are there any cheats for Skeleton Pirates?

Yes and no. To learn more about how the one cheat I’ve found in the game work, click here.

What is the maximum amount of gold stars you can collect?

The counter will stop going up at 99,999 however that doesn’t mean the counter actually stops. You can keep collecting gold stars and the internal counter will continue to give you credit for them, even though the screen will appear to have stopped counting them at 99,999.

On games that I know I won’t need an extra weapon spot, I will put in the gold treasure chest and collect extra gold stars just to keep my count maxed out so that later in the game I won’t need to worry about it.

What are the best weapons in the game to choose for any given round of play?

Although sometimes this will vary because you have certain pirates that have to have certain types of weapons, my favorite selection for the start of an average game is shown below.

By selecting those exact weapons, you can pretty much breeze through any level of play.

I continue to put down treasure chests and jack cannons on each lane until I have one jack cannon on every row. By then I inevitably have two full columns of treasure chests so I start saving up to place down a Mace Catapult next to each Jack Cannon. Then there is nothing you can’t beat.

Will you show a sample of how you layout your defenses?

Sure. Here is a screenshot of one of my games. You’ll find this layout and weaponry selection works perfectly for almost any high end battle. 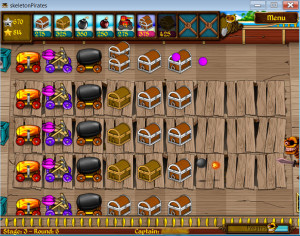 Here is another layout I used from a game level 3-8. As you can see I use basically the same formula every game, just mixing up which main weapon(s) I use. And once you have 99,999 gold stars, I found you never need more than 1 or 2 gold treasure chests every couple of games, to keep that topped off. 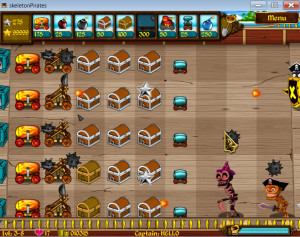 Check out this review of the game…. My favorite game by far is Plants vs. Zombies. The format of this game is almost identical, just with a different theme. It’s a little more challenging because you have to collect stars not only to buy weapons against the skeleton pirates, but also to collect ammo. The new weapons you obtain aren’t just given but you have to earn them by killing parrots that will attack your placed weapons. A great little strategy game and a must buy for me! — 5 stars.